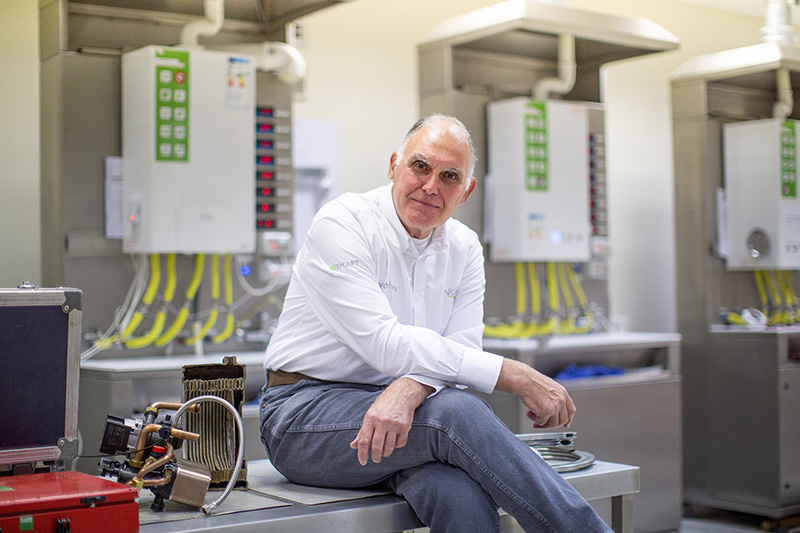 BACK TO BASICS ON BOILER EFFICIENCY

Some might say that heating installers have never had it so good with the wide range of products from which to select and assemble a system that meets or even exceeds their customers’ needs and wants (or disappoints). David Iszchak, Technical Trainer at Vokèra by Riello looks at the basics of boiler efficiency in keeping homeowners comfortably warm at an affordable cost.

If the average homeowner does any research when considering a new boiler then it will probably be restricted to information from a brand they’ve heard of or whatever turns up on an internet search. They may often be more attracted by the presentation of a product, or the appearance of a control than the capability or potential of the appliance, or just as importantly, the appliance and control combined. Achieving comfort with energy efficiency at low cost is generally what most homeowners desire, but how are these three desires reconciled in a real world installation?

Certification efficiencies
Boiler efficiency is hard to assess as ‘test bench’ figures may not be representative of how a boiler will actually work in a property. Steady state test bed operation at two flow and return temperatures (80-60°C and 50-30°C) allow manufacturers to extrapolate test efficiencies of over 100% which, if the case is warm, the flue is warm, or there is water vapour at the terminal, could be mislead. These figures are steady state testing on certified test rigs and heating systems simply do not work in that way. The thermal performance of properties will also differ greatly depending on factors such as location and lifestyle: weather patterns are not consistent; occupation patterns vary, as do heat gains from solar, cooking and electrical appliances.

Reality Bites: The closest a real world system is likely to get to steady state testing is to be operated continuously at temperatures that do not allow the boiler to cycle on/off. For the majority of the heating season the maximum output of the boiler is not required (this is certainly the case with a combination boiler) so good modulation between maximum and minimum output to the heating system is important. Generally speaking, 1:5 is thought of as a minimum and a higher turndown ratio will improve matters if it does not entail too much additional cost or complication. So, keeping the boiler on longer seems to suggest this might bring the boiler closer to certification efficiencies, but at what cost? Running longer does not necessarily mean more fuel will be used as a boiler with a wide modulation range will be able to match output to the varying load of the property. However, during low load operation heat is still lost from the appliance through the flue. If the boiler cannot modulate down to meet the load then it will cycle off and on however if cyclical losses are low continual losses through the flue may exceed pre and post purge inefficiencies and standby losses. Range rating the boiler heating output to the likely maximum requirement of the property, particularly with combination boilers, is a simple way to reduce cyclical losses and boiler firing cycles.

Advise responsibly
Whatever the type of boiler or control, comfort is the primary objective for most households but acceptable levels of comfort differ. Also, whilst an end-user’s preference may be 23⁰C if their budget only covers heating the house to 19⁰C then how can that circle be squared? It is often quoted that a 1⁰C reduction of the space heating setpoint is the equivalent of 8% saving in fuel for heating. If this is to be believed then a 3⁰C reduction should equate to a 24% reduction in the fuel cost –really? Almost a quarter?

Perhaps the most important thing to remember is that the homeowner is the one paying the fuel bill not the installer so any advice or claims on energy savings must be given responsibly. I know this may come under the heading of ‘stating the obvious’ to the reader of a trade magazine however, to use a phrase from the education sector, it’s also what’s known as ‘reinforcement.’ Sometimes the object of the exercise becomes hidden behind an avalanche of marketing information trumpeting worst to best case scenarios when that is rarely the case the installer is faced with. The object of the exercise is customer satisfaction with an installation and running cost they can afford that will win the installer the work and retain the customer; the homeowner is not a test bed for the latest marketed technological advance.

Finally, it is important not to lose sight of the absolute basics when it comes to optimising boiler and system efficiency:

If your boiler requires a repair, we offer a fixed price repair which includes call out, labour and parts (Terms and Conditions apply).

Repair & Care is a maintenance & support plan for your broken-down boiler, providing a one-off repair (where repairable) and then ongoing maintenance and support for your boiler and controls, to help ensure they continue to work correctly and to minimise the chances of mechanical and electrical breakdown. It is provided by Domestic & General Services Limited.

If you have taken out a Repair & Care plan, you have a no fix no fee promise. If the expert engineer can’t fix the initial fault or if the boiler is beyond economic repair, you’ll get a full refund of any monies paid up until that point – no questions asked.

An experienced and professionally qualified engineer will service your boiler in accordance with the following schedule: